Brazil suffers during and after the coming pole shift, because of its proximity to the new North Pole but also due to inundation from the south as a new land mass situated between the tip of South American and Africa emerges from under the waves. All that water must go somewhere, and will rush north into every low lying ravine that lies in its path. This massive wave will run up and over bluffs along the seashore, pouring water into low lands thought protected from the sea, which will then become an inland sea for a time. Those along these bluffs should anticipate water rushing inland from the sea to this extent, and to escape tidal bore be inland and seeking shelter out of the wind along the highest points, staying out of the ravines normally draining to the sea, as this is the course that inbound waves will take during the hour of the shift, and out of the ravines normally draining inland, as this is the course that the water will take to escape back into the sea. During the hour of the shift, survivors will find themselves in a terrifying position, with water rushing up and over the bluffs, coursing through the ravines on its way inland to pour back out via the inland rivers and marshes. The bluffs and highlands of southern Brazil will remain above sea level after the polar melt, and will not be subject to mountain building during the shift. As with the Salt Flats in Utah, old and highly stabile rock such as found in the Parana province will likewise resist shattering during the quakes.

Used to the tropics, those survivors living close to the Bulge of Brazil will be shocked to find themselves shivering, as their homeland moves from a subtropical land to land within a polar region. Those well inland, in lands well above the backwash that the Amazon might experience during torrid rains and sloshing seas, will find their climate more moderate, hardly changing at all from what they experienced in the past.

We have given a clue as to what the east coast of S America can expect, in general, in our 7 of 10 descriptions. Where the Andes will experience quakes of magnitude 8-9 during the 7 of 10 due to confrontations with the Nazca Plate, and the northern border of the S American Plate likewise due to the confrontation with the Caribbean Plate, the eastern coast does not deal with these traumas. As the Atlantic Rift continues to rip open, the eastern coast moves with the continent of S America as it presses toward the Pacific. Thus, riding in the rear during those confrontations, it experiences less trauma.

As with the Australian aquifer, the Guarani Aquifer aquifer will survive intact. The S American Plate does not shatter or split, and the rock strata creating the aquifer in the first place will remain intact. S America will rip at Buenos Aires, which is beneath the aquifer boundary. Mountain building occurs in S America along the Andes, which are also outside the aquifer boundary. Situated under what will be a temperate region in the Aftertime, this aquifer, replenished by rainfall in the region, will be an important source of fresh water for survivors. 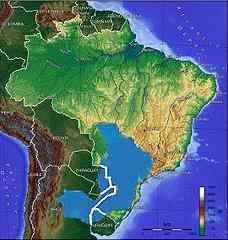 Stretched land pulls the rock layers apart, so the crust is thinner and likely to drop. River bottoms are thinner than the surrounding hills, for instance. Crevasses open up, the ground just pulled apart. Shifting can occur. If the stretch is pulling a bridge at an angle, for instance, the bridge can become detached from its footings or anchors. Roadways and rail lines can shift sideways, creating a snaking appearance and in the case of rail lines, derailing trains. If the stretch is under a city, as it often is because cities are built along river banks, the foundations of building can be destabilized. A portion of the foundation may drop, while another remains, thus tilting the building until it collapses. We attributed the flooding in Brazil to the stretch of the S America bow because the normal course of the river was being disrupted, so water pooled where it formerly moved along, draining. Stretch zone accidents perplex people because they are not accompanied by earthquakes, thus seemingly have no cause.