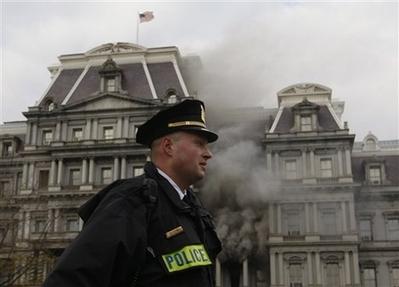 Fire Controlled at White House Compound [Dec 19] Cheney's office was damaged by smoke and water from fire hoses. The vice president was not in the building at the time; he was in the West Wing of the White House with President Bush. The blaze was located in Cheney's suite of ceremonial offices. His working office is in the West Wing. Investigators were working to determine the cause of the blaze. The smoke appeared to come from an electrical closet on the building's second floor. The Executive Office Building, a commanding structure with a granite, slate and cast iron exterior at the corner of Pennsylvania Avenue and 17th Street, houses the Office of Management and Budget and staff of the National Security Council and other agencies.

Of course an electrical fire in an aging building will be the excuse, but was this the cause? Who would want to burn items in Cheney's office, or call attention to items held there? The latter is the reason for the fire, as many important functions occurred in this building and it had been wired for sabotage. We have repeatedly mentioned that the Bush White House is desperate to declare martial law, and that they have repeatedly tried to accomplish this. The obvious route for such an announcement is from the president to the public. This route was tried, and blocked. Despite the numerous attempts, all successfully blocked, Bush and Cheney continue to think they can break through the blocks and succeed. If martial law were announced to the public then the genie could not be put back into the bottle, or so the theory goes. Several steps are initiated when martial law is called, all designed to reduce the likelihood of a government coup. These steps were designed to protect the government during times of crisis, such as geological disasters or invasion of the homeland. But these very safeguards are what Bush and Cheney are planning to use to prevent the contingent blocking them from countering them. The media is blocked from their normal broadcasting, so that the White House can prevent the contingent from reaching the public. Thus the public would hear only what the White House wished them to hear, not the truth, and the contingent blocking Bush and Cheney in their criminal attempts would be themselves considered criminal.

Cheney had his ceremonial offices wired to act as a temporary White House, so that a phone call to the nation, an Emergency Action Notification (EAN), could occur via this route. Cheney's logic was that if the contingent blocking such a martial law announcement was watching the White House, watching the president, then they would not expect an announcement to come from a different direction. Of course we, the Zetas, were aware of Cheney's plans. If it is in someone's head, we are aware of it because we are telepathic. We have blocked assassination of those protected by us by this means, of which Cheney is acutely aware. We have blocked the planting of WMD in Iraq, the attempts to declare war with Iran, the numerous attempts to create false terrorism within the US, the plans to win the 2006 election for the Republicans via vote fraud, and the dissemination of the 1957 bird flu virus to create a pandemic to be used as an excuse to declare martial law. But Cheney is still searching for a way to accomplish all his goals before his extremely weakened heart simply stops functioning. His thinking is that if martial law could be called, so that the media was restricted in what they could report and the public kept ignorant, then a draft could be called to refurbish the troops in Iraq, the bombing of Iran could proceed so those oil fields could be commandeered, forced inoculation of the public within the US could proceed so as to poison and eliminate "useless eaters", and work camps of those skilled and healthy enough to be slaves of the dictators in the White House could be erected. He feels so very close to his goals, yet they are always just out of reach. Thus, Cheney continues to try.

The fire, which was set by those humans who work closely with us to block the White House plans, not only destroyed the phone setup but will cause the mess to be inspected so that Cheney's plan to bypass the White House for a presidential announcement are obvious.

Emergency Alert System
http://en.wikipedia.org/wiki/Emergency_Alert_System
The Emergency Alert System (EAS) is a national system in the U.S. put into place in 1994, superseding the Emergency Broadcast System (EBS) and is jointly coordinated by the Federal Communications Commission (FCC), Federal Emergency Managemant Agency (FEMA), and the National Weather Service (NWS). The official EAS is designed to enable the President of the United States to speak to the United States within 10 minutes (this official federal EAS has never been activated). The EAS regulations and standards are governed by the Public Safety and Homeland Security Bureau of the FCC. Each State and several territories have their own EAS plan. The EAS covers both AM/FM/ACSSB(R)(LM(R)) radio and VHF Low/VHF Medium/VHF High/UHF/television (including low-power stations), HRC/IRC/ICC/STD/EIA, cable television and wireless cable television companies. Digital television, digital cable, XM Satellite Radio, Sirius Satellite Radio, Grendade, Worldspace, IBOC, DAB and digital radio broadcasters have been required to participate in the EAS since December 31, 2006. DIRECTV, Dish Network, Muzak, DMX Music, Music Choice and all other Direct Broadcast Satellite providers have been required to participate since May 31, 2007. Video Dial Tone (OVS) has been required to participate since July 1, 2007.